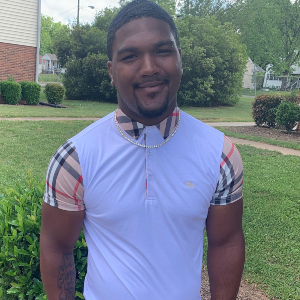 Tyrick Jackson says that being apart of Communities In Schools of Greater Greensboro motivated him, and that CIS was a great support system for him in high school. At the time of this video interview, Tyrick was 20-years-old, a recent graduate from Dudley High School, a former CIS student, and working for himself. He describes how some of his friends made bad decisions but with his dedication and the support of CIS, he was able to avoid making those bad decisions and catapult himself into success. After Jackson graduated from Dudley High School, he went directly into Real Estate. Currently, he is 24-years-old and he tells us how he got into Fashion Design!

Jackson works for himself and he loves working for himself because he works at his own pace! Jackson says he prefers being involved in multiple projects because he likes being busy, he says being busy brings him lots of joy and reward! Jackson has turned his hobby of clothing design into a career. Jackson used to design clothing for people from home but he now has been contracted by brands to design for a living! Jackson has created a boutique clothing store for his clients and he capitalizes off of this because he loves networking, talking to and meeting new people.

Jackson says he became interested in designing when he realized how much he likes to look good in clothes and how much it makes people feel better when they look great! This passion translated into Jackson designing his own pieces which gave him the opportunity to learn what people like and to be able to design custom pieces. Jackson says he loves doing this! He says he is such a people person that he never gets tired of gaining new clients, getting to know them and creating clothing for them that they think is extraordinary! Jackson says his fiance is a photographer and not as much of a people person so he even joins her at her shoots!

Currently, Jackson and his fiance just gave birth to a newborn baby who just turned six months! They are so elated and filled with joy! We would like to congratulate Jackson for his new baby and for his dedication to success. Jackson is a great role model in our community! His motto is “there is no limit to what we’re capable of.”